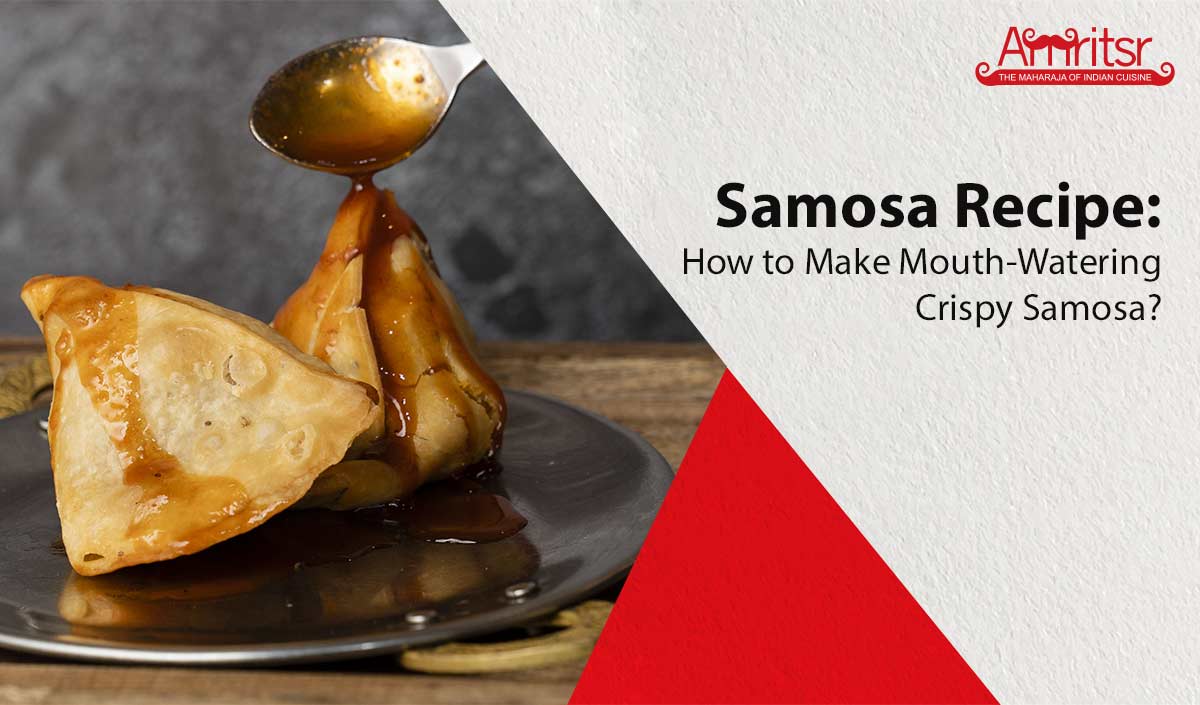 Samosa is one Indian snack that nobody could resist. Not just Indians love this snack but also many people across the globe. This Indian snack always comes to your rescue whenever you get hunger pangs – be it during your regular snack time or in the middle of the night. You can also easily prepare samosa at home in a healthier way by using less oil.

Samosa is a famous North Indian snack, which is now available in many parts of the world, all thanks to the increasing number of Indian restaurants throughout the world. This deep-fried snack can easily satiate one’s hunger pangs while making them instantly happy.

The traditional aloo samosa recipe requires no introduction and usually served with red tamarind or green mint chutney. It is usually stuffed with spicy potatoes that are just mixed or sautéed with some easily available Indian spices. It takes only a few minutes to make samosa at home if you follow proper cooking steps required for making this delicious snack.

It takes just a few minutes to prepare for samosa at home. If you feel like cooking something for your family, you may experiment in your kitchen by trying this recipe. You may even add peas into the stuffing to add more taste to a simple aloo samosa.

Once prepared, serve these crispy snacks hot with any chutney you like to make it more scrumptious. Feeling all thrilled to try making samosa at home? Just go ahead and follow the given steps to try this delicious recipe. This simple dish is likely to spread and relish warmth among your loved ones, as you chit chat with them over a cup of tea and bite of hot samosas.

Now, before jumping to the samosa recipe we answered some questions that you may have regarding the samosas.

Where did samosas originate from?

It is claimed that samosa was originated in the Middle East, where it was called sambosa in the 10th century. Abolfazl Beyhaq, an Iranian historian, even mentioned samosa in his work, Tarikh-e Beyhaghi. This dish was introduced to Indian people in the 13th or 14th century by Central Asian traders.

Amir Khusro, a royal poet and scholar of the Delhi Sultanate, mentioned that around 1300 many princes and nobles used to enjoy “samosa made from ghee, onion, meat, and other ingredients.”

In the 14th century, Ibn Battuta, an explorer, and traveller, also described a meal served at the court of Muhammad bin Tughluq where sambusak or samushak, a tiny pie filled with minced meat, pistachios, almonds, spices, and walnuts, was served right before the third-course meal.

Hence, samosa is believed to be originated in Central Asia. The consistency and size of samosa may vary; however, its shape is usually triangular. Indian samosas are vegetarian and accompanied by red tamarind chutney or green mint chutney. The vegetarian version of samosas was originated in Uttar Pradesh.

Now, it is a popular savoury, appetizer or snack that’s widely available in the Indian Subcontinent, Central Asia, Southeast Asia, Southwest Asia, North Africa, East Africa, The Mediterranean, and the Arabian Peninsula. Because of vast cultural diffusion and emigration of different areas, samosas today are also available in many other parts of the world.

How do you make crispy samosa crust?

The secret to making a samosa crispy is by not letting the oil in your pan get too hot. It will only cause samosa to turn dark quickly while the stuffing will not heat up. You must put a wooden spoon in the hot oil to check it. If little bubbles start forming around the wooden spoon or a small piece of cube goes golden brown within 60 seconds, the oil is perfect for frying.

Keep the flame low to slightly medium to fry samosas and get a perfect crispy texture. Gently keep sliding three to four samosas in hot oil, depending on the pan’s size. Turn them frequently until they turn golden brown.

Let, samosas turn as deep golden brown as you want them to be. But be careful of burning them. You want to achieve the golden brown colour – NOT brown. However, the longer you fry them, the crispier they will be.

How to make samosa dough at home?

For making samosa dough at home, you need to mix the flour in a medium kneading bowl or food processor. Add a few teaspoons of oil or ghee into the flour for added flavour. Keep adding water a few times until proper tight dough is formed.

Keep kneading the dough for five minutes. Now, let it rest for 15 to 30 minutes or more. You may even prepare the dough in advance and refrigerate it.

How do you keep samosas crispy for a long time?

When the skin of samosa turns crispy, these are warm throughout. You may let them cool on a wire rack to prevent them from getting soggy with oil. You may even transfer them onto paper towels and reheat in the oven to maintain its crispiness for a longer duration.

How do you seal samosa?

You can wrap your samosa using fingers and some water at samosa’s tip and fold it one last time. Keep pressing the sealed end with fingers until it’s perfectly sealed.

How do you roll a samosa triangle?

First, take small pieces of dough and roll them into a full circle using a rolling pin. Once the dough is perfectly flattened in the form of a full circle, you can cut it in two halves or semi-circles. Fold each semi-circle individually to form a cone shape. Fill these cones with potato stuffing and seal the end with water to form a perfect triangle.

How do you stick samosas together?

How do you keep samosa fresh?

You may keep cooked samosas wrapped loosely in plastic or foil. This way it can easily last for up to two days. You may even freeze them for up to six months by wrapping them in foil and sealing it in plastic. Do keep the frozen samosas in the fridge for a while before reheating them.

How many calories are there in a samosa?

One samosa contains around 262 calories. Out of these samosa calories, carbohydrates are 24g, fat 17g and proteins are around 3.5g. One samosa is likely to offer you around 5% of the total daily calorie requirement out of the standard adult diet requirement of around 2,000 calories.

What do we call Samosa in English?

A samosa is a baked or fried dish with spiced potato fillings or other fillings containing peas, onions, lentils, noodles, macaroni, minced lamp, cheese, minced beef, etc. In English, samosa is called “samosa” only or may be referred to as a triangle Indian snack.

Why samosa is called samosa?

It is originally named samsa after Central Asian pyramids. The historical accounts also refer it to as sanbusaq, sanbusak or sanbusaj – all these terms are derived from the Persian word, sanbosag. Now, samosa is a popular snack in different parts of the world.

Which flour is used to make samosa?

Is Samosa good for health?

Samosas contain potato fillings. Potatoes are not harmful but when fried in excess oil, ghee or butter, these are not healthiest carbohydrate providers.

Samosas don’t have healthy carbs that your body needs. Hence, it’s not a healthy option. However, if baked, it could be a healthy snack for you and your loved ones.

Samosas originated in Central Asia ages ago. However, it’s a popular Indian snack found in the regions of Punjab. Punjabi samosa is often much spicier and filled with potato and peas filling and served with mint or tamarind chutney.

Wondering how to prepare samosa at home? Well, collect these ingredients, to begin with:–

For making samosa dough, you need all-purpose flour/maida, salt to taste, ajwain (carom seeds), four tablespoons desi ghee and water to bind the whole mixture into dough. You need to ensure that there is firm texture while kneading. Once it’s prepared, leave the dough aside for a while.

For preparing samosa at home, you need to prepare aloo stuffing by putting a pan on medium flame. Let it heat for a while and add desi ghee into the pan. Now add coriander seeds and let them turn slightly brown.

After that, add the ginger-garlic paste into the pan, along with some green peas. Stir it properly and then add green chillies, salt, kitchen king masala, coriander powder, garam masala powder, and haldi (turmeric) into the mixture.

Stir it well and add mashed aloo (potatoes) to it.  Also, add freshly chopped green coriander leaves into the mixture. Keep stirring it for a while and your aloo stuffing is ready. Take out the mixture in a bowl and let it cool for a while.

Step 3: Make round dough balls, flatten them and cut into half

In this step, you have to take small pieces of dough and turn them into round balls. Now flatten the round dough balls into a circle using a rolling pin. It is best to wear gloves and mask while preparing food in the kitchen for avoiding any sort of contamination. After rolling a dough ball into a complete circle, cut the circle in half.

After that, take the semi-circle in one hand and dip another hand in the water to apply it on the inner side to fold the edges to give it a cone shape. Once the cone shape is formed, start adding aloo masala stuffing into the cone, apply some more water on the open ends and seal it nicely with your fingers.

Step 4: Fry the samosa in a pan

Now, put some oil in a pan, add the triangle samosas into it and start heating the pan. Remember, that you don’t have to pre-heat the oil. Just put the samosa into the oil and then turn on the stove (as shown in the video below).

That’s how your samosa recipe is prepared. You can enjoy it with green (mint) chutney or red (tamarind) chutney.

Below is our Full video for Samosa Recipe!

Important Things to Keep in Mind!

However, if you’re not into cooking, you can easily order samosa from our Amritsr Restaurant. Our restaurant is known for serving some of the best Indian and Chinese food. So, if you ever crave for North Indian food, you must visit us or simply order food through our 24/7 online food delivery service.

How to make Paneer Tikka in 7 Easy Steps?

Paneer Tikka is a popular Indian appetizer served in many Indian events or par...
Read More