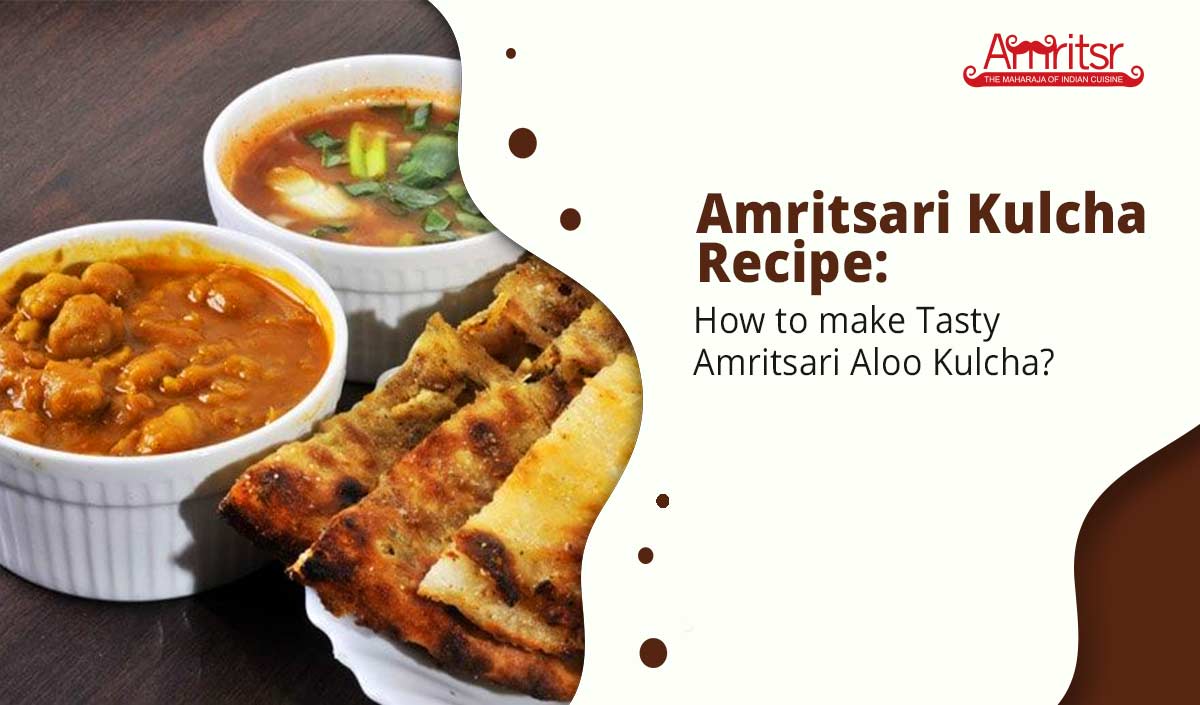 Punjab is renowned for its scrumptious North Indian recipes, including Amritsari Kulcha. Kulcha is a crispy yet softened bread that’s stuffed with mashed boiled potatoes and Indian spices. If you ever get a chance to visit an Indian restaurant anywhere in the world, you must try this delicious recipe for sure.

Whether you’re trying to make any Indian dish for special guests for dinner or going to an﻿ Indian restaurant in Dubai but don’t know what to order, Amritsari Kulcha is the best option for sure.

What does Kulcha Mean?

Kulcha, soft textured leavened bread, is a local variation of naan. Just like chole kulche in Dubai, you can easily find this Indian flatbread in any North Indian restaurant in the city.

Depending on the consumption and popularity, the Amritsari Kulcha recipe is on top of the list. It is a breakfast dish because of the high calories. However, it’s available at restaurants even in evenings to satisfy your hunger pangs.

Through its name, we’ve known Amritsari kulcha to have originated in Amritsar itself. However, according to certain historic facts, Kulcha’s invention is dated back to the Mughal era. According to some facts, it is believed that Shah Jehan’s royal chef once prepared stuffed kulcha for him.

The King liked the dish so much that he started eating it in breakfast, as well as lunch, and also praised his chef in his “darbar.” Slowly, this dish became popular among Mughals and Nizams. Later, it also became a staple dish in many Northern regions of India, including Amritsar in Punjab.

Amritsr Restaurant brought the delicious Amritsari Kulcha to Dubai in 2010 and is the only restaurant in the city offering this lip-smacking Indian delicacy. So, if you ever want to try this Indian dish or craving for the taste of authentic Punjabi food, you must visit our Amritsr restaurant in Al Karama, Dubai.

What is Kulcha Made of?

Kulcha is made of white flour/maida and potato stuffing. To prepare kulcha, first, you need to prepare the dough by adding some flour/maida, little sugar, salt to taste, and some baking soda to maida. Gently start making dough using your hands.

Knead the dough for at least 10 minutes until the dough becomes soft and smooth without sticking onto your hands anymore. After kneading the dough properly, you can leave it and begin preparing the stuffing.

Here are the main ingredients required to make potato stuffing:

Step 2: After combining all the ingredients together, mix them well to make the proper stuffing.

Step 3: Once you mix all the ingredients thoroughly, keep the stuffing aside.

Step 4: Now, take some dough to make a round ball, add potato stuffing inside it, and seal the dough in round shape. Now, sprinkle some dry maida on a wooden desk and press it with hands to make round kulcha.

Step 5: Once the stuffed dough is flattened in round shape, apply some water on both sides to let it stick to the tandoor.

Step 6: Now, carefully place kulcha inside hot tandoor that’s preheated to a temperature of 185-degree. Once you’ve placed the kulcha in tandoor, close its lid for good 5 to 8 minutes to let it cook properly.

Step 7: After 5-8 minutes open the lid, you’ll find satisfying brown kulcha. Now, it’s time to take it out of the tandoor.

Step 8: Now, apply some butter on the kulcha and sprinkle some chaat masala to add more taste and flavour. The prepared kulcha is served with hot Choley with gravy and mint/tamarind chutney or achaar.

Just in case if you are wondering, Below is our complete video for Amritsari Kulcha Recipe:-

How do we pack food at Amritsr Restaurant?

Once the Amritsari Kulcha is ready, it’s immediately packed in butter paper and cardboard packing. The kulcha is delivered with hot Chole with gravy, which is packed in a sealed plastic container.

How many types of Kulcha are there?

Kulcha is a variation of naan (Indian flatbread). In most parts of North India, kulcha is served as it is, without any stuffing, with different types of cooked vegetables and gravies. The plain kulcha is called “naan” in all Indian restaurants.

However, the stuffed kulcha, for instance, the aloo kulcha has potato stuffing. On the other hand, paneer kulcha has a stuffing of cottage cheese. The stuffing’s quality may be changed according to the customer’s order.

Besides, other types of kulchas are onion kulcha, masala kulcha, butter kulcha, Kashmiri kulcha and more. When you ask for the Amritsari kulcha, you’re customarily offered the usual potato stuffed kulcha.

These stuffed kulchas are spicy to meet the authentic taste of Punjabis. But it can vary according to the customer’s preferences, such as less spicy or spicier. The usual spices added to kulchas are chopped green chillies, amchoor powder, garam masala powder and red chilli powder.

What can we eat with Kulcha?

Butter is applied on top of your Amritsari Kulcha and further garnished with chopped coriander leaves in dried form to add more flavour to the dish. If you order kulche chole in Dubai or anywhere else in the world, you will be served kulche with hot channa/chole made from chickpeas.

Even sour and spicy chutney is served with this dish. The chutney is made either from mint leaves or amchoor (or pomegranate) powder to give it a sour and crunchy flavour. One can even enjoy Kulcha with pickle or vinegar-flavoured onions to add more taste to its rich and spicy flavour.

How many calories are in Amritsari Kulcha?

The usual serving size of one Amritsari Kulcha has around 210 calories. Out of which proteins account for 20 calories, carbohydrates for 145 calories and fat for 54 calories. One Aloo Kulcha serving offers around 11 per cent of the total calorie requirement of an average adult diet of about 2,000 calories per day.

Note: This nutritional information is based on a diet of around 2000 calories per day.

The authentic flavour of the Amritsari Kulcha recipe is spicy with a crispy texture. You can easily prepare this North Indian dish at home using the ingredients mentioned above.

However, if you don’t want to make it at home, you can even order it from Amritsr Restaurant, a popular Amritsari kulcha restaurant in Dubai. You can also check out their online food menu to order some other delicious Indian dishes like Chicken Tikka, Samosa, Butter Chicken and more.

How to make Paneer Tikka in 7 Easy Steps?

Paneer Tikka is a popular Indian appetizer served in many Indian events or par...
Read More