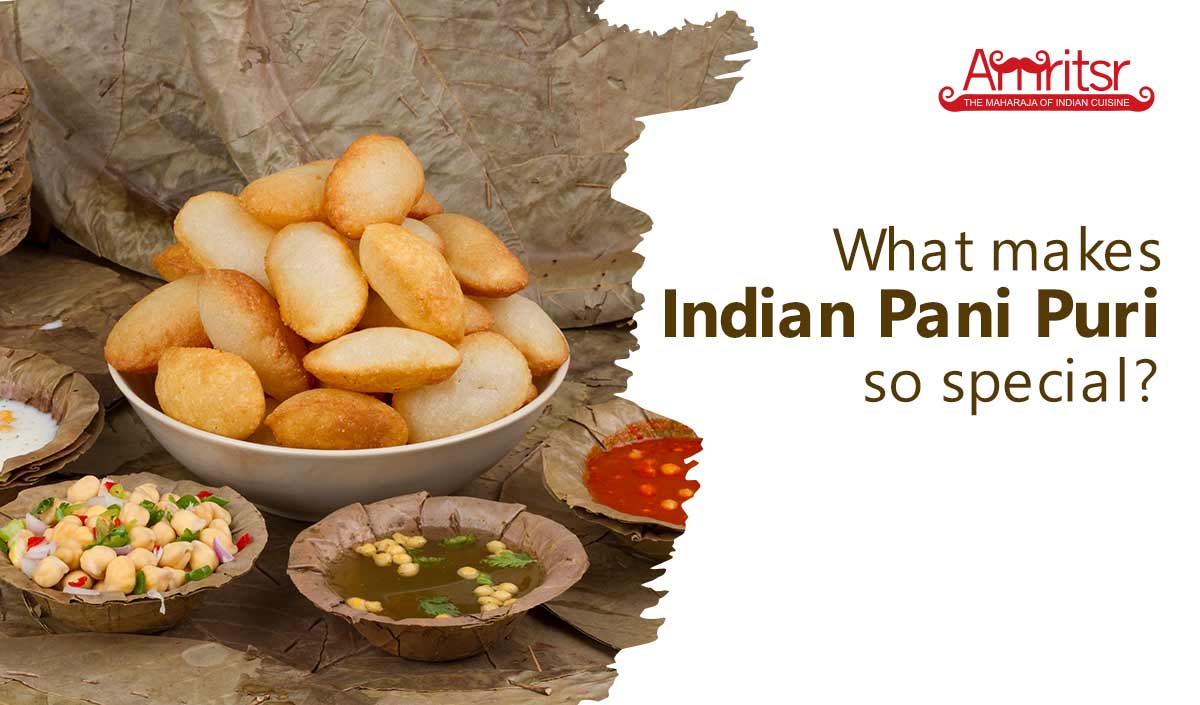 It is impossible to not consider pani puri when street foods of India are spoken about. This Indian snack is meant for all moods. You’re happy, eat it, you’re upset, eat it, you’re craving for something spicy, eat it.

This snack has been winning hearts since the time it was invented and has proved to be a life saver for all times we craved for ‘something good to eat’. It is one of those Indian discoveries which every generation is thankful for.

What is Pani Puri?

It is a snack originated in the Indian subcontinent consisting of round hollow balls filled with flavored water and mixtures. The Indian pani puri is known by various names across the country.

In North India, it is called Golgappa, Puchka in East India, Gup Shup in southern states of Telangana, Hyderabad, and more. Ask any pani puri lover and he or she will share a joyful nostalgic story as to how they enjoy the snacks!

What is a Pani Puri made of?

The balls are usually made of wheat or semolina with different water flavors depending on your personal choice. You can also use different water and different fillings for pani puri according to your tastes and preferences.

How to Eat a Pani Puri?

It is one of the easiest snacks to eat. You serve the puri with the filling and pani, crack the puri (puffed balls) at the top to create a small hole to place the filling inside it. Add some meethi or teekhi chutney if you want it. Pour the flavoured water of your choice and place the whole puri in your mouth at once. And you are good to go to enjoy the best indian street food! You can also make a pani puri chaat by cracking the puris, putting mixtures, different chutneys and curd. This is also one of the ways to enjoy it!

How Many Types of Pani Puri are There?

There is no exact number of types of pani puri as it varies from place to place. The varying tastes of this snack are probably one of the main reasons for its popularity and why we love it beyond the world. It has a combination of both sweet and sour taste which makes you fall in love with the snack instantly.

Some of the most common and loved types of pani puri are:

Pani puris can be spicy, tangy, and sweet all at once, such varied tastes at reasonable prices. The sourness and sweetness of it can be managed as per your choice and tastes giving it another edge over other snacks. Furthermore, the taste is soothing both in summers and winters because of the taste mixed with the tanginess making it a delight to eat and relish the popular snack.

If you are looking for the best pani puri in Dubai, your answer is Amritsr Restaurant. Our restaurant creates the authentic snack with different fillings and pani for pani puri. This comfort food is sure to act as your biggest mood enhancer and help your taste buds get alive.

This popular street food mainly in India and other different parts of the world is sure to take you down the memory lane. So, if pani puri is your weakness and you are searching for places to get Indian gol gappas in Dubai, visit Amritsr Restaurant now! You will certainly describe pani puri in one word – DELICIOUS!

Fun Fact: Do you know what pani puri is called in English?

It is popularly known as ‘Water Balls’ among the foreign tourists who love that spicy and tangy flavour of water. So, if you ever hear someone talking about water ball, they simply mean pani puri.

Why We are Best Biryani Restaurant in Dubai, UAE?

Biryani- The name in itself is enough to make you hungry! There can be nothing ...
Read More

Tandoori Chicken the name in itself is enough to make your mouth water in no ti...
Read More

If you’ve grown up in India, or anywhere around the world, you’ll s...
Read More

Desi paratha is a delicious Indian dish, oozing with ghee and packed with vario...
Read More